All of us have a memory that is so clear and vivid that we can remember exactly what we were doing and where we were when something extraordinary happened; for me it was when I heard that President Kennedy had been killed or when those planes flew into the Twin Towers. For most people the event has to have a deep emotional meaning that changes their perspectives permanently from that point on, what some people call an “aha moment.”

Now, I know that it is a bit of a stretch to compare earth shattering events to tasting wine but the analogy is good because it illustrates two components that make the moments significant. First   the event is emotionally significant to you as an individual and  secondly the event changes your perspective from there on.

“Momentarius,” the name we have given to the series of wines that are going to have an emotional significance that will change your perspective on similar wines  from then on. The emotional tug will come from the fact that you will have not tasted a wine like this before and that very experience will change your perspectives from that point on.  What I am trying to say is that the Moment of surprise will open your mind – and make you amenable to change -it is going to broaden your horizons of enjoying different concepts in wine be it white or red.

Momentarius Monticello White is the second white wine in our Momentarius series, the first was a Petit Manseng fermented on the skins an “orange” Petit Manseng, fulfilling all the needs of an “aha moment” as I described above.

The concept is for the Monticello AVA to develop their version of a white wine that is common to the area, the buzz term being a wine the expresses “Regional Typicity”

European wines have over the last couple of hundred years adopted a designation that defines the quality level character of the wine from a specified area For example in Burgundy a wine made from grapes anywhere in the state is called a “Burgundy” wine and usually regarded as having less quality than a wine from a specific area within the Burgundy such as Côtes de Nuit and in this case the wine would be of higher quality And to take it the highest quality the wine from a single vineyard within the Côtes de Nuit -for example would be a Gevry Chambertin, from the Cotes de Nuits in Burgundy.

So perhaps we could develop a parallel system in which grapes can be sourced from anywhere in Virginia and on the label it would say “Virginia” wine, then if say for example the wine originated in the Monticello AVA that would be stated on the label indicating to the consumer a wine of higher quality. Now if that wine came from an individual winery such as Veritas or Keswick or Jefferson it would then indicate the highest quality level of wine from Monticello in Virginia.

Let’s talk about the Monticello AVA, the wine area that includes Charlottesville and most of the wineries in central Virginia. The Monticello area is recognized as one of an official American Viticultural Area (AVA) named after the estate of our illustrious Virginia founder of the constitution, hugely Francophilic, and wine loving former President Thomas Jefferson.

Virginia with Central Virginia in black. 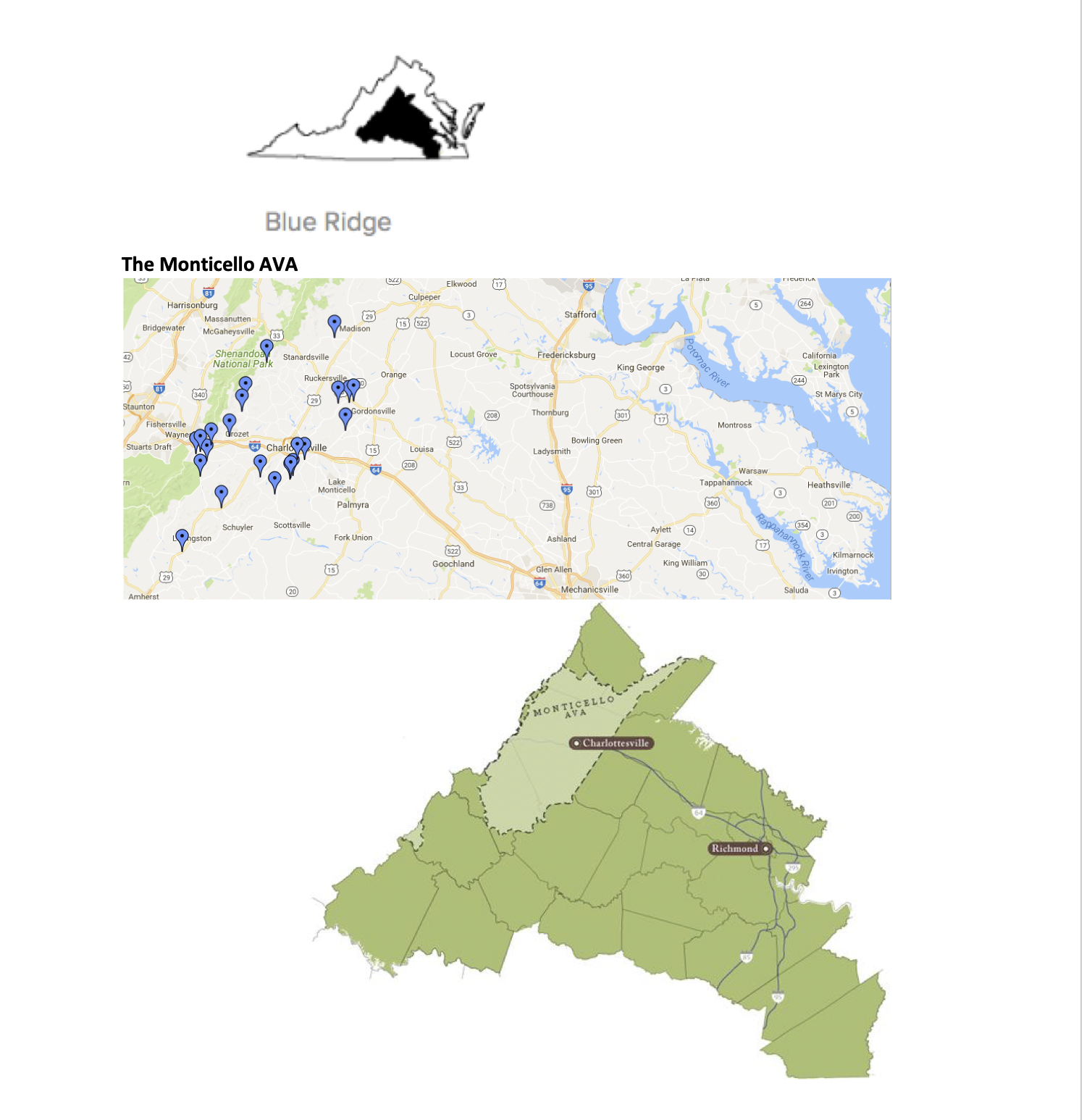 I can remember going with George to a Monticello meeting with the aim of creating the concept of a Monticello white blend. We took wines like Conundrum, a very successful white blend from California; a white Châteauneuf du Pape. At the meeting it was decided that if there was to be a Monticello White blend it would have to be sourced from vinifera grapes from the Monticello and to add the extra quality level the wine needed to be barrel aged.

The four most popular vinifera grape varieties in the Monticello AVA are – Chardonnay, Viognier, Sauvignon Blanc and Petit Manseng. Remember “vitis vinifera” are thoroughbred varieties that were brought to the USA from Europe in the late 19th century. It is a fact that vinifera  grapes produce the highest quality wines.  The alternative are hybrid grapes that are vinifera hybridized with native American grapes -vitis labrusca and vitis aestivalis that although perfectly acceptable to most  people the wines do not reach the quality levels of vitis vinifera.

So in the big picture any wine sourced within the Monticello AVA made up of at least a proportion say not less than 25% of the four vinifera grapes could be labeled “Monticello White Blend” that would indicate to the consumer a higher quality wine than a Virginia White. Then the highest quality label would be wine made from an individual vineyard say for example Veritas Monticello White Blend would be Veritas’ best rendering of the grapes grown in the Monticello AVA.  How that winery expresses that blend would be highly individual not only the way the grapes are grown but also the relative proportions of each of the individual grapes in the wine and of course the way the wine is made or vinified. This is where the skill of the winemaker comes in. How the wine is fermented in barrel or in tank, what yeasts are used and the other biggest tool in the winemakers armamentarium is the use of oak for each individual grape variety. The amount of oak and the degree of barrel aging is decided according to the stylistic goals of the winemaker, the end result, a high quality, regionally specific wine worthy of the title Monticello White Blend, who knows we might even come up with the same idea for a red wine!

So here it is Veritas Momentarius Monticello White Wine

The wine is pale lemon in color with pronounced aromas of white flowers, orange blossom and acacia that precede aromas of Meyer lemon, stone fruit and ginger. On the palate the wine has bright mouth -watering attack that is softened by the unctuous mouthfeel as notes of citrus and fresh green grass lead onto stone fruit, peach, apricot and pineapple; hints of Pina Colada and ginger add to the wonderful complexity of this wine. The finish is complex and long lasting.

The wine has everything, balance, intensity, complexity and a forever finish – outstanding!

And as a final note having waxed prolific about the Monticello AVA did you know that Monticello has been nominated by USA Today reader’s choice as one of the top ten wine regions in the US of A- which wine region wins depends on the number of votes submitted to USA Today. You can go online and vote for your very own wine region that you are lucky enough to live in.

You can vote every day until August 10th.

Things To Do Today: VOTE for Veritas!

While you’re there vote for the Monticello AVA best USA Wine Region!
https://www.10best.com/awards/travel/best-wine-region/monticello-virginia/